Background
A few weeks ago, I was talking to Jemma Issroff, a fellow Recurser, about a toy programming language she was building. We ended up thinking about automatically memoizing pure functions based on their parameters. As we thought about this problem more and more, we decided it would be interesting to be able to tell which parameters of function were actually required to compute its result at runtime. The idea at the time was that we could cache just based on those parameters. It turned out that just figuring out how to compute those dependencies was an interesting question in itself.

Problem Statement
Let's say we have a function \(f\) that takes arguments \(x_1,...,x_n\) and outputs some result \(res\). We want to check at runtime which of those arguments are really necessary to compute \(res\). Let's take a very simple example:

The answer is because if the value of x were to change in a certain way (for example from \(1\) to \(-1\)), our return value would change.

Definition of Dependency
So far, we've been talking about what dependence means informally. For all the sticklers out there, I'm going to give a more concrete definition. We can say that expression \(a\) depends on expression \(b\) iff in order to compute the value of \(a\) the value of \(b\) must first be computed.

Rules of Dependency Propagation
Now that we have an intuitive understanding of how to determine which dependencies a function needs, let's try to make this intuition into a concrete algorithm.

The dependencies of any call to this function, for example \(f(1,2)\), are simply x and y. But now let's look at a more complicated example:

Let's create two rules, one for "+" and one for "if". Let's pretend x, y, z are generic expressions and deps(e) of an expression \(e\) gives the set of all of its dependencies.
Here are our two rules:

Combining these two rules we can trace the dependencies of any function made up of only additions and if statements! While that's not really mind blowing, I found it kind of interesting.

Now if you are a battle hardened senior software engineer, you probably know that some of the most advanced programs powering cutting edge tech companies like Google and Facebook will occasionally use more operators than just "+" and "if".

So how do we handle other operations? Simple! Create more rules!

Arithmetic
Unlike in grade school, here arithmetic is simple. Almost all arithmetic operators follow the exact same rules as "+" (except multiplication).

This optimization can also be applied to boolean functions such as && and ||.

Let's define a function called \(argdeps(f, a_0, a_1,...,a_n)\). \(argdeps\) takes a function \(f\) and its arguments \(a_0,...,a_n\) and returns indices of the arguments which are needed to compute the corresponding value of \(f\). Under the hood, this function is computed in the exact same way that we have been computing deps.

Lists
Now that we're feeling warmed up we can tackle one of the more complex rules sets.

Let's take a quick look at a function involving lists.

Now fellow travellers, we have come to a fork in the road. To one side, lies the simple path on which we treat the entire list \(a\) as a single unit. We would then say that the output of \(f\) merely depends on a. To the other side lies the difficult path, to treat each element of \(a\) as its own unit.

Many would say, we can choose the best route to take based on tradeoffs and product requirements. Normally, I would agree that taking the simple path is a totally reasonable option. However on this particular journey, I believe we don't really have a choice, we have a responsibility.

Let's look back at our example from above:

The dependencies of this function are \(a[0]\) and \(a[2]\). This new notation is very simple but important, especially when talking about multi dimensional arrays. One subtle note is that this notation allows us to specify different levels of granularity. \(a[0]\) for example, could be a single element or an entire array. I have also not actually defined what the set \(deps(a[0])\) is yet. Before we actually get there, it will be useful to look at a few more examples.

The Recomputablity Test
Here's a way to test our intuition:

Length Dependencies
One way to fix our problem is to take an additional dependency on the length of a. We will use \(lendeps(a)\) to denote the set of the expressions which the length of a depends on.

Since res is also an array we must also define its length dependencies with a second rule.

If a and b are two lists, the resulting third list depends on both a, b, and their lengths. Let's define \(res = a + b\). The rules for computing deps(res) and lendeps(res) are as follows:

But we are not actually quite done yet. Check out the function below: 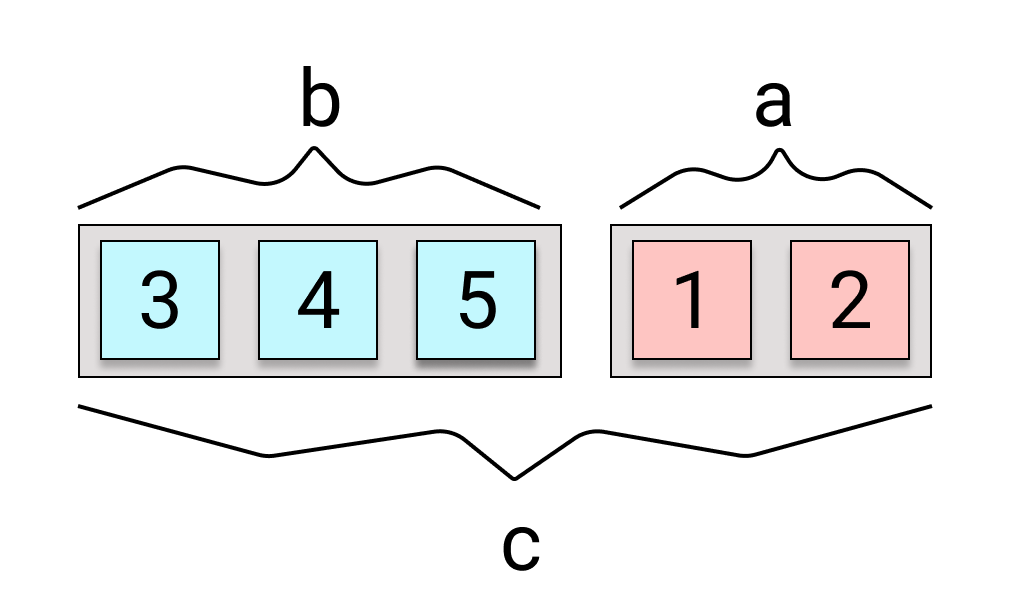 Here we are again faced with a choice. We can either say that all elements in a list depend on their value and the length of the list or we can break it down more granularly. Granularity costs time and memory so it's a legitimate tradeoff. I choose to go down the more granular road (in the interest of keeping the dependency set smaller) but I will write out the rules for both versions:

A quick note about the computation feasibility of this rule. This rule as is applied recursively to every element in a and b so it is very computational intensive when you have large multidimensional arrays. I'd recommend using some kind of lazy evaluation for this rule in practice to avoid having to compute it for every element when unnecessary.

Can I try this out?
You may have noticed that all the code in this article looked a little strange. That's because it is all written the custom programming language Jemma has been building. The language supports all of the dependency tracking operations I talked about above and you can play around with it yourself! If you need inspiration, every linked function in this blog post is a working example.

Where would stuff like this every come up? So I guess it's kind of cool that we can granularly track data dependencies, but more importantly why would we every want to? The answer is I'm not totally sure! But here are some quick ideas:

Thanks to Jemma Issroff and Robert Lord for providing feedback on this post.